About 15 years ago my mother moved from the family home to a small apartment. She made the change a few years after my father died.  For over 35 years she lived in the old barn-like house that 6 of my parents’ 7 children at least partially grew up in.  Of course it was not a barn, but it resembled one so I will henceforth refer to it as the Barn House.

There was 20 years between my oldest sister, CHD, and my youngest brother, WW. CHD was grown up when we moved into the Barn House.  She only lived there for a couple of months before she found an apartment and got on with her adult life. I must have been about 12 when we moved in.  I was in 7th grade.  There was a lot of living that made THAT old house a home!  At first there were only five children living there, because CHD had moved out in 1965.   Good Catholic that she was, my mother was soon pregnant again and we had a sixth child living with us (the 7th sibling) in the Barn House by 1966.  In The Borg society, I am referred to as 3 of 7.

When Mom made the decision to move, I went to Northern Indiana to assist my siblings in paring down her belongings.   The goal was to keep only the “essentials” enabling her to fit into a one-bedroom apartment.  My sweet mother is a fully realized pack rat.  She saves everything because everything is on her “essentials” list.  It was always chaos in that house, but after 35 years the Barn House was jam-packed with memories and odd treasures.  Old pictures were in every drawer, and filled old purses and boxes tucked away in the back of her closets.  Cookbooks were stuffed with additional handwritten recipes.  Her bibles, St. Joseph Missal (Latin/English) and post Vatican II missal (English only) were chock full of genealogical goldmines in the form of funeral cards and obituary clippings.  She saved every saint medal, holy card, rosary, ceramic Blessed Virgin Mary statue, and wall crucifix her kids and grandkids ever gave her.  She has 7 children and 16 grandkids so that made for a lot of Catholic tchotchkes.  I do not know how many years worth of braided palm leaves we found.  For those of you who do not know, you get palm leaves when you go to mass on Palm Sunday.  You take them home, braid them and put them up in the house.  It is a Catholic thing.  I actually had one up on my bulletin board in the NYS house. Why not?  I threw it away last February before WE moved. Actually, I regret throwing that braided palm away.   What was I thinking?

It was fun wading through each room of my parents’ house one last time.  Of course I wanted to help my Mom and my siblings, but I must confess my primary purpose was to wallow in my mother’s things for the last time. I savored every drawer full of "stuff" and every room full of junk. That "stuff" was soul deep.  It was about my past.  It was about my parents’ life together.  It was about my mother’s neurosis. It was all a living testament to my mother’s strengths and weaknesses.  I wondered if our lives would change once her "stuff" was gone.  Interestingly, it was also about old time Roman Catholicism, the kind of mystical/devotional life every Catholic was taught to observe back before Vatican II modernized the church in the mid 1960’s. I have to stop before this post turns into my standard rant against Vatican II changes.  It always shocks people who mistakenly presume my normal liberal views would support saying the Mass in the vernacular.  That rant will have to wait for another post.

Unlike my more pragmatic siblings, I could not fault her when I found stacks of old church calendars in a corner of the kitchen.  These are calendars that each parish church gives out free to parishioners every year. The pictures of saints, the BVM, and her illustrious son were reason enough to keep them. They were beautiful.  There are many things one might fault the Roman Catholics for, but their art is not one of them.  For crying out loud, wouldn’t it be a venial sin to throw out things like that anyway?  OK, I threw them away when she was not looking, but still – I was so happy to get my grubby little hands on them for a few minutes. I stood firm in defending this collection, although I did kind of wonder why the pile was stacked on top of chocolate covered cherry boxes filled with old recipes and newspaper clippings that were stored underneath a chair pushed in a corner of the kitchen.  But then again, the opposite corner held a cart filled with old newspapers and magazines.  Maybe it was about balance, or a feng shui decision meant to increase the flow of favorable energy in the room?  I am willing to give the old lady the benefit of the doubt.  I love her madly and I find her quirkiness endearing.

Believe it or not, I found a handwritten Pillsbury Flour Contest recipe submission that my maternal grandmother (who died before I was born…) submitted in the 1940s.  It was lying between two magazines in a pile of many.  I wish I knew how it got there.  If I had just picked up the entire pile of magazines and dumped them in the trash this recipe would have been lost forever.  Talk about treasure!  I probably slowed everyone down because I insisted on looking at every knickknack and perusing old recipes to my heart’s content.  I did not care, though.  On that day I imagined myself an archaeologist of sorts, and I am nothing if not self-indulgent.  It made the old lady happy, too.  She was thrilled that I valued her stuff.  I was having fun and I might even have been her favorite child for a few fleeting moments there.  When you are 3 of 7 you appreciate those fleeting moments.

I took pictures of rooms and furniture and piles of junk.  My younger siblings thought I was nuts.  They seemingly had no nostalgic feelings about the Barn House.  They just wanted to throw everything away so the house could be cleaned out, cleaned up and sold.   I was shocked and disturbed.  Why wasn’t I practical and focused?  Could it be that I am like my mother?  Oh, HELL no!

The best part was when three of us went through the linen closet with my Mom present.   She had a huge upstairs hallway closet with lacquered wooden doors that opened up like French doors.  This linen closet was wide enough that all four of us could stand and sort through the shelves at the same time.  We found many linens, very few of them useable.  There were old tablecloths with holes in or stains on them, sheets so threadbare you could see through them, and old towels and doilies that were tattered and torn.  Unfortunately, our sweet mother did not see them in the same way we did.  These things held different meanings for her.  She became agitated and defensive, not wanting to throw anything away.  Her standard response if we posed the question “Can we throw this away?” was “No, it is still good, someone could use that.”  She displayed classic Depression Era post-traumatic stress syndrome with subsequent hording behavior. It was amazing to observe at close hand. Her eyes were wild. She positioned herself behind us so she could see exactly what each one of us was doing.  She pulled things off the trash pile if we tried to sneak them there without asking her first.  We made four piles on the floor: the trash pile, the Goodwill pile, the give-to-a-family-member pile, and the keep-for-the-new-apartment pile.  I think you can imagine how much went on the trash pile.

After 15 minutes our sweet mother could no longer stand the sight of us.  We took a break.  We three siblings conspired when Mom went to the bathroom (do not get me started on her bathroom…). We decided to reassure her by putting the unusable things she could not bear to throw away on the Goodwill pile and then throw things away when we took them away from her house.  We also agreed to “take” many things she wanted to pass on to family that in reality no family member would possibly want, and to quietly dispose of them accordingly.  Sorting into piles became easier for all of us.  She was happy, we were happy, and the job got done.

I came home from that visit with many amazing treasures:  An aluminum potato ricer I have absolutely no memory of, the tin French fry slicer that had intrigued me my entire childhood even though I do not make French fries, a heavy metal meat grinder I will almost certainly never use, the no-tech haircutting tools my grandmother used to cut our hair as children (giving us Mamie Eisenhower bangs in the 1950s).  I foolishly brought home two boxes filled with the inexpensive Currier and Ives-style china that my Mom had painstakingly purchased piece by piece at the grocery store.  I did not want them, but it made her so happy when I said I would take them.  I also had Mom’s old Singer sewing machine even though both my daughter and I already had new machines.  I took many funeral cards and all the Blessed Virgin Mary statues that I ever bought her, despite the fact that I have not been a Roman Catholic since 1968.  It made me happy to take these things, but I found it made me sad to have it all. I am happy T and I were able to get rid of so much “stuff” this past year in anticipation of our move to Florida. That is when I finally gave the potato ricer, the china, and the old sewing machine to the Salvation Army.  They were still good.  I am sure someone is using them. 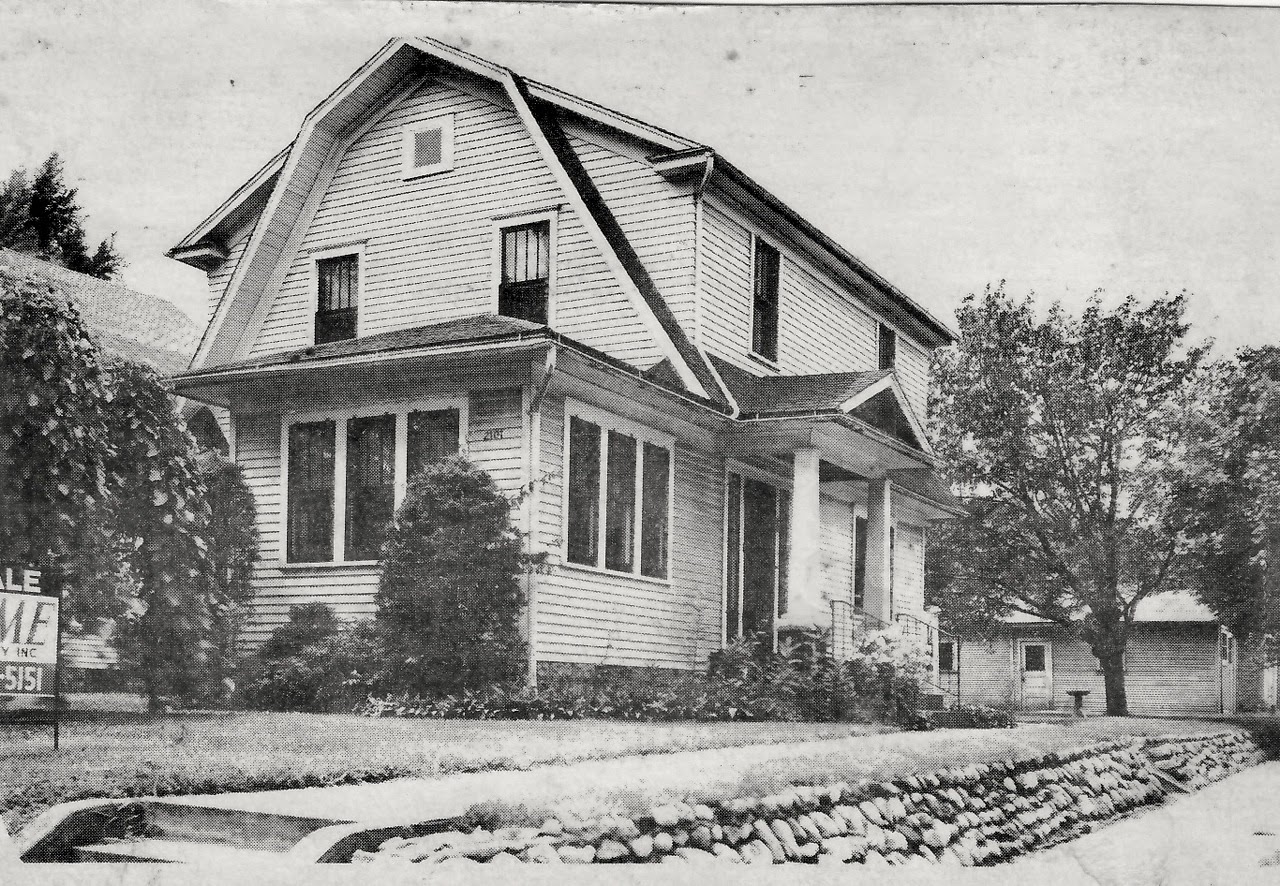