Do you have the time?

I was thinking about “time” this morning, the concept of time, that is.  I googled “time” and here are some of the things that came up.

How old is concept of time?

Artifacts from the Paleolithic suggest that the moon was used to reckon time as early as 6,000 years ago. Lunar calendars were among the first to appear, with years of either 12 or 13 lunar months (either 354 or 384 days).

Who created the time?

The Egyptians broke the period from sunrise to sunset into twelve equal parts, giving us the forerunner of today's hours. As a result, the Egyptian hour was not a constant length of time, as is the case today; rather, as one-twelfth of the daylight period, it varied with length of the day, and hence with the seasons.

About time - Mathematical Association of America

Is time an illusion?
According to theoretical physicist Carlo Rovelli, time is an illusion: our naive perception of its flow doesn't correspond to physical reality. Indeed, as Rovelli argues in The Order of Time, much more is illusory, including Isaac Newton's picture of a universally ticking clock.Apr 16, 2018

The illusion of time - Nature

What is time made of?

Time comes from every particle within our bodies, including our DNA that is made of these same atoms and particles. Time is the frequency of longitudinal energy waves. However, time is not constant. It changes with motion.

Does the past exist?

Events in the past and in the future do not exist. The only reality, the only thing that is real, is the present. This idea is called Presentism. This idea, however, runs into some serious problems when you start taking into account relativity.Nov 10, 2019

Are The Past And Future Real? The Physics And Philosophy Of Time

Can we travel back in time?

Time travel to the past is theoretically possible in certain general relativity spacetime geometries that permit traveling faster than the speed of light, such as cosmic strings, traversable wormholes, and Alcubierre drives.

It goes on and on with questions and concepts.  Really fun.

We are in the habit of leaving our cat, Murray, outside for a while after dinner/supper (your choice, depending on where you are from) until we go to bed at night. Our back yard is fenced in, and he hasn't shown interest in venturing beyond. He loves being out there alone in the dark.

We let him out if he wants to, of course. He's in charge of us. I wish I could say he is a benevolent master, but he's not. He's self-centered and quite demanding. You know the type!

He killed a rat the other evening. It was his first big "kill" and he was very excited, absolutely beside himself. It was the first time I've seen a rat in our yard, so I was both pleased and horrified over the "kill." It's complicated. In all sincerity, I apologize to all the soft-hearted rodent lovers out there. I'm afraid I would make a terrible Buddhist.

We had noticed he's recently been obsessed after dark, sitting at the bottom of our palm trees in the back yard, looking up and stalking "something."

It was a roof rat. Apparently, they are especially fond of living in palm trees. Notice my wishful thinking in pretending it was just one roof rat? We'll see.

"Call them what you want–roof rats, fruit rats, black rats–but they’re all the same thing. These are the same rats that spread bubonic plague and fleas. They’ve been with humans for centuries, and throughout that time, they’ve been less than ideal house guests. Rats spread far more diseases than the frightening Black Death, though. Others include murine typhus, salmonella, rat-bite fever, and leptospirosis, to name only a few."  https://www.myheronhome.com/pest/rodent-exterminators/prevention/

Email ThisBlogThis!Share to TwitterShare to FacebookShare to Pinterest
Labels: animals

My husband is old school. At 70, we still mow our own lawn because he "can mow his own damn lawn." I like his spirit, and I like doing yard work alongside him. He mows. I edge.

We never "edged" a lawn before we moved here. We didn't need to up north, where actual lawn grass is grown. Here in Central Florida, that soft, lush northern grass won't grow. There are specific grasses passing for lawn grass here. St. Augustine grass comes to mind.

We don't care about the perfect lawn. In fact, we wish it would dry up and blow away. The grass in our lawn grows sideways, not straight up. The blades shoot up, but the plant has woody roots that grow to the side. That's why edging is required. If we didn't edge, our grass would creep over the sidewalks and into the street. The homeowners association and our neighbors would pitch a fit, for sure.

And then there is the hidden cost of "taking care of your own damn lawn" in Central Florida. While mowing today, my husband had a Cuban tree frog jump on him, mowed over a fire ant nest (getting numerous fire ant bites), and was stung by a yellow jacket.

Florida is not for the timid.

Buying shoes for the boy

I offered to buy new school shoes for grandson, N.

I struggle figuring out things like the right size, what's cool, what's appropriate. A couple of years ago I took him shopping alone for new shoes and got shoes that were way too big. The parents had to take them back to exchange them.

My daughter, M, was supposed to go with N and me to the shoe store, but she was sick. So I took him alone. Again. Surely they knew it wasn't a good idea, right?

As always with N and Grandma, it quickly became a comedy of errors. For some reason (COVID?) the store had removed all the metal shoe measures. Instead, they pointed us to diagrams on the floor where you put your foot down and try to guess what size you are. I don't want to guess. I want to know.

Twice I kindly asked an employee to go get me the metal measure. He said he would, but he never did. Remember when there were actual shoe salespeople who fit a child for shoes? Not anymore. It's all a guessing game now. No service, no metal measures, no help. Just N and me squabbling.

N liked the first pair he saw. Adidas high tops. Based on the guessing game, he tried a few sizes on. I went with the smaller size, as he said they were comfortable. We bought them and I took him home.

Surprise, surprise, they were an entire size too big. His father took him back to the store to exchange them. He made N look around and try on other shoes. They ended up getting two pairs for the price I paid for the way too big shoes. N seems happy.

I refuse to take him shoe shopping alone in the future. 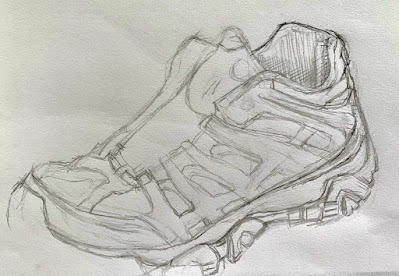