Senator Klobuchar Has Had Enough

I had too much to dream last night

I had a disturbing dream, one wherein I was losing my short term memory.  I guess that must be a concern to me or my unconscious mind wouldn't torment me with it while I slept.

In the dream I was talking to a friend.  I was supposed to meet Tom afterwards.  I once knew where I was to meet him, but as I talked to my friend a wall went up in my dream mind and I simply couldn't find that memory.  I knew I had to meet him, but I had absolutely no memory of where.  The memory was behind a wall.

I wonder if that's what it is like to lose short term memory?  The insurmountable wall. 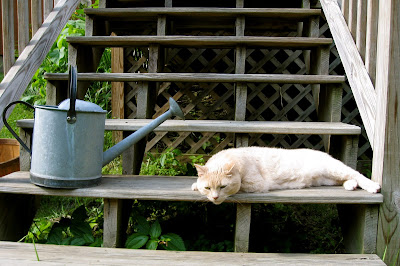 Email ThisBlogThis!Share to TwitterShare to FacebookShare to Pinterest
Labels: dreams

There are no suckers or losers in the U.S. Military #3 - last one, I promise

There are no suckers or losers in the U.S. Military.

My 5th great grandfather, Jesse Rector, served as a foot soldier in the Revolutionary War. Jesse and his older brother James both participated in the siege of Yorktown, culminating in Lord Cornwallis' surrender to George Washington on 19 Oct 1781. According to the Yorktown national Historical Park literature, "The American victory at Yorktown, the last major battle of the American Revolution, secured independence for the United States and significantly changed the course of world history
One of his son’s, Isaac Rector, applied for membership in the Sons of the American Revolution based on Jesse’s service. He wrote as follows:
“My knowledge of my father’s service as a soldier in the Revolution is derived from what I have heard him say on the subject. I have often heard him speak of being a soldier in the Revolutionary War. He belonged to a Virginia regiment of militia organized early in 1781 and disbanded soon after the surrender of Cornwallis. He served with his regiment at the siege of Yorktown and was present at the surrender.
I have heard him say when his regiment reached Yorktown our lines were six hundred yards from those of the British, and that before the surrender they were moved up to within three hundred yards. He said that at the latter distance our troops could hear the crashing of the walls of the houses within the town as they were knocked down by our artillery. He said as the British General Cornwallis marched up through Virginia, he gathered up all the good horses he could find. After the surrender our troops found he had many of the horses killed or driven into the river and drowned to prevent them falling into our hands; that the tide washed many of them ashore and that the air was foul with the odor of their decaying carcasses.
He said he saw the British troops march out and stack their arms and spoke of the angry manner in which some of the soldiers put down their guns. He also spoke of the fine music he heard by the bands on the French fleet after the surrender."
--Isaac Rector, 1891 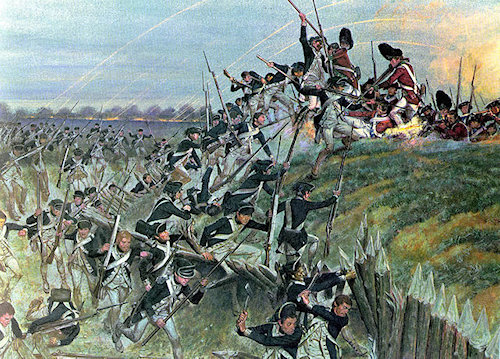 There are no suckers or losers in the U.S. Military #2

My father enlisted in the Navy in 1943. He participated in the Campaign for the Liberation of the Philippines in 1944. His ship was at the second engagement in the Battle of Leyte Gulf. One of the hallmarks of this particular military campaign was the Japanese introduction of kamikaze pilots. Kamikaze is a Japanese word meaning "divine wind" and these suicide pilots sank 17 U.S. ships and damaged 50 more in the battle for Luzon in the Philippines as they flew obsolete planes into American ships, hoping to do considerable damage to the U.S. fleet.

As a machinist, Dad worked below in the ship. He remembered hearing a kamikaze plane hit the ship next to his, which sunk as a result of the attack. He said it was extremely loud and the ship he was on shook so much that he thought it was his ship that had been hit. When he realized it was another ship that was hit, he ran up 3 flights of stairs to see what was happening. Men from the damaged ship were jumping into the water to escape the fire on board. My father volunteered to help rescue them and spent the rest of the day pulling men both living and dead out of the Pacific. One rescued man was burned over 90 percent of his body. Although he did not know the man, Dad volunteered to stay by the man’s side. For three full days and nights he stayed with the stranger, changing his bandages and simply not leaving the man alone with horrible pain. The man died, but not alone.
Fuck you, Donald Trump. 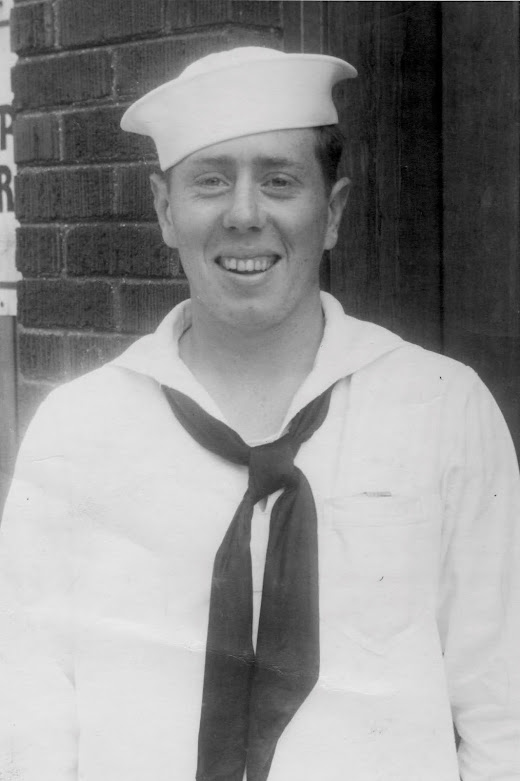 Do you have a story to tell about a brave U.S. military man or woman from your own life? Does it hurt your heart to know our president thinks they were suckers and losers for serving their country? I'd love to read about it. Democrats need to reclaim the moral imperative in the U.S. We have been misunderstood for too long.
Posted by Colette at 8:03 AM 13 comments:

There are no suckers or losers in the U.S. Military

There are no suckers or losers in our military. All should be honored for their service.

This is my Uncle Joe. He served in World War II. He was stationed at Pearl Harbor, Hawaii with what was then known as the Army Air Corps. On 7 Dec 1941, he was walking back to the barracks after attending mass when the Japanese attacked Pearl Harbor. The heel of his shoe was hit by flying shrapnel, but Joe was not hurt. After Pearl Harbor, he was assigned to Canton Island, a South Pacific coral island, where he helped to operate one the first radar facilities. Later, he received a transfer to Europe. Joe was a tailgunner, flying bombing missions over Germany. The first week in December 1942, on his 13th mission, the B-17 was shot down over the Black Forest. The crew parachuted to safety. All survived but the pilot. Joe hid in an abandoned farmhouse for 4 or 5 days. He melted snow to drink, and in one of the houses he found one egg, flour and sugar. His feet froze, and he wrapped them in old rags. He decided to try to make it back to the American line. He was dressed up as an old lady, and the Germans spotted him crossing a river. He was captured and imprisoned at Stalag Luft 4 POW Camp Gross Tychow, Germany. He was liberated at the end of the war. Fuck you, Donald Trump. 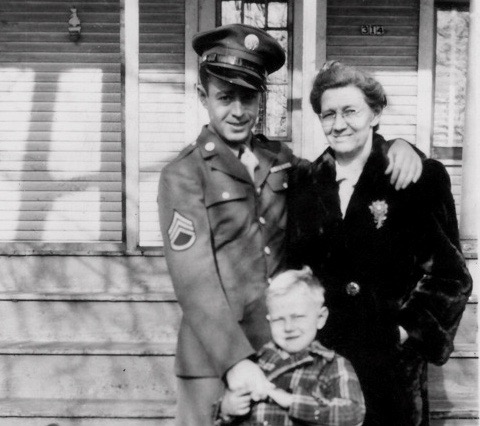 Uncle Joe with his mother and his youngest brother after he returned from the war.
Posted by Colette at 1:34 PM 27 comments: