I'm reasonably good about taking care of myself.  I exercise, eat well, and go to all the required doctors (and dentist) for all the annual exams. I do this in spite of the fact that, like many others, I absolutely hate going to the doctor.

I have this "not very well thought out" belief that if I go to a doctor, they WILL find something wrong that needs to be fixed. It's their job, for crying out loud. I know this is ridiculous. But since it is a belief (i.e., emotion based) I don't feel inclined to defend it as an idea (i.e., logic based).

Consequently, I was not surprised when my dermatologist found a basal cell carcinoma on my face. It has been there for a few years. My previous dermatologist pooh pooh'd it. I tried someone new this time. She biopsied and sent it off to the lab. A week later, she cut it out. Then I had the indignity of spending another week with 4 stitches between my nose and my lip on the right side. The swelling pushed my nose up on one side, and my top lip hung down over the bottom in the opposite direction. She also froze off 4 actinic keratosis on other areas of my face. I looked lovely.

Now I'm in the market for a big floppy hat. Perhaps one like Sally Rayburn wore on Bloodlines? That might be big enough to hide me from my enemy, the relentless *^$@! sun.

The only problem is that, unlike Sissy, I am not a skinny little person. I am a chubby little person. Consequently, a hat like this will likely make me look like my totem animal, the turtle. As one gets older, life seems to become a series of indignities. I'm getting used to it.

My husband was attending a meeting that was held in a building on a nature preserve the other day.  It was about 6:30 when he left and as he walked to the parking lot he glanced over and this is what he saw staring at him.  It never got scared or flew away.  It was clearly scrutinizing him. 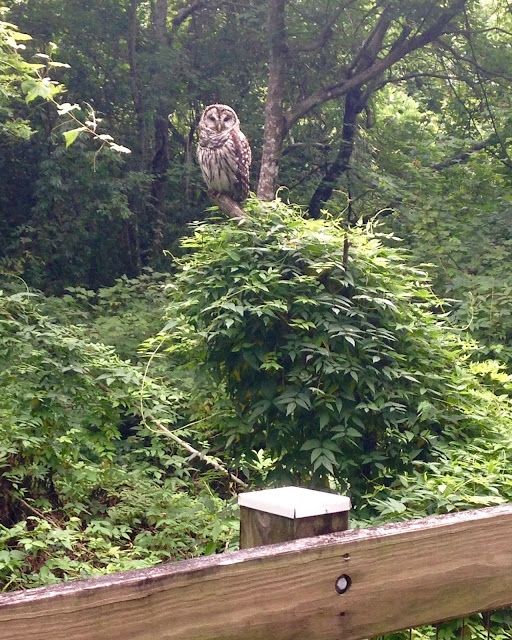 The blogger am recently commented on my turtle masthead. She is an artist and a women of power. When she speaks of images, I pay attention.

This photo represents a creature with fears and anxieties, but who pokes her head out of her shell from time to time with great hope and with as much energy as she can muster. She is small and seemingly insignificant. She is slow, but she is steady. Despite being restrained by a giant, she is curious and takes a chance by coming out of her shell to see what is going on. Who knows where that small act of courage might take her?

I came late to blogland. I started writing in 2012, when I went to help my daughter for a few weeks after the birth of her son. I blogged to share the experience with my large extended family. They probably didn't read it.

Many of the original posts have long since been deleted because they revealed too much about me. I retreated back into my shell. I let my writing slide when I went back home and returned to work.

As I prepared to retire in 2013, I started blogging again. This blog became my lifeline as I adjusted to a new and considerably less productive life. This is where I think out loud.

I hope you have noticed the other turtle on my page. She lives on the bottom. She is swimming in full glory. If the little, tentative turtle on the top of my page is where I started, then the big one at the bottom is the one I hope someday to become.
Posted by Colette at 12:37 PM 21 comments:

The conference consisted of 3 break-out sessions each day (with multiple possibilities each time) and then various all-conference sessions with speakers.  On Saturday, there was a PAC lunch featuring a number of terrific speakers, including some from Florida, which hosted the conference this year. The speakers included Democratic Florida Senator Bill Nelson, and two Florida congresswomen, Lois Frankel, and Val Demings.  There was also a union activist named Kim Shultz, and a spitfire older feminist named Dr. Janet Canterbury.  It was so fun to hear these political warriors speak in person.

Representative Demings (the new congresswoman from my district, and former police chief of Orlando) set the place on fire towards the end of her speech letting us know why "she won't go back."  When she was done, I felt like I had been to church.  Then the last person to speak was Eleanor Smeal, someone us older feminists will remember.

According to Wikipedia, Eleanor Smeal "is one of the major leaders of the modern-day American feminist movement. Smeal is the president and a cofounder of the Feminist Majority Foundation (founded in 1987) and has served as president of the National Organization for Women for three terms, in addition to her work as an activist, grassroots organizer, lobbyist, and political analyst."

Her most entertaining quote came when she was speaking about the amazing Women's March on Washington, the one that happened they day after the most current presidential inauguration.  She noted that there were 661 additional marches that day in the U.S. alone, and hundreds more around the world.  She said:

"We will never forget how mad we were.  But we didn't sit back, we organized."  A little later  she said something like: "...and as every knows, when we (women) get screwed, we multiply!"

But you can watch it yourself.  The incomparable Eleanor Smeal starts speaking at about the 1:30:00 mark.  Do yourself a favor and watch Val Demings, too.  She starts about 53 minutes into the video, but doesn't really get going until about half way through her speech.

Email ThisBlogThis!Share to TwitterShare to FacebookShare to Pinterest
Labels: NOW

As promised, I spent two days as an eager newbie participant at the 2017 NOW conference in Orlando. It did not disappoint. In fact, it raised so many issues and inspired so many revelations for me, that I will be writing about aspects of it for at least a couple posts.

I arrived 20 minutes early and sat in my car feeling foolish. Nothing strange about THAT!

At exactly 8:00 a.m., I meandered into the hotel, and found the registration desk on the mezzanine. I also found a table laden with pastry and fruit.  More importantly, I found the coffee service. Fully loaded I searched out an empty seat on the mezzanine to wait, and perhaps to schmooze. My friend, CAP, who was to meet me there, was not the uncool early bird I am. It was early and I was feeling alone and dazed brave, so I sat down with a few strangers to see what would happen.

I sat down next to someone about my age. She was a talker, which took the pressure off me. When I managed to blurt out who I was, where I was from, and why I was there, she gave me a long look and then, with squinty eyes, said "I'm not sure how I feel about those new social media groups." For a few long moments, I felt like a fraud.

Thankfully, I have a strong ego. I also know secret groups serve a purpose for women who would not otherwise be politically active. AND we meet young people where they congregate, a real problem for traditional feminist organizations where the inter-generational tension is palpable. I thought to myself "Okay, now I know certain members of the old guard are uncomfortable with the proliferation of secret Facebook groups." Forewarned is forearmed. Next time I'll have an answer!

Fully caffeinated, I moved on to the breakout session on voter registration, which started at 8:30 a.m. I didn't want to miss a minute of it.

I had such a great time.

Much more to come.