I haven't been checking my blog, or reading the blogs I follow for a couple weeks. Sorry! I'll catch up with you all soon. Instead I've been obsessed over genealogy. I've been working on families for a niece-in-law, and for a nephew-in-law.

I finished my niece-in-law's tree. Both her parents didn't know their fathers' genealogies, so that was fun to help them understand where they came from. I'm still obsessed with my nephew-in-law's family tree, and I will be until I've found every bit of documentation I can find going back as far as I possibly can. It's a game. I am so happy when I have a juicy family tree to explore.

His last name is Newton. Of course, Sir Isaac Newton is a many times removed great uncle. He's likely the great uncle of almost all the Newton's in America. Sir Isaac actually helped me with this tree, pointing out to me which uncle of his (Sir Isaac's) my nephew-in-law descends from. Big help.

Apparently when Sir Isaac was being knighted, he provided Queen Anne with a handwritten short tree that proved his connection to some Newton who was his relative. Stunning find. Email ThisBlogThis!Share to TwitterShare to FacebookShare to Pinterest
Labels: genealogy

My husband became a great-grandpa again. His granddaughter S had a baby boy. He's a beauty, just like his 2 year old sister, CH. I claim these children as my great-grandchildren, too. After all, his daughter R is the half-sister of our daughter, M. Is that presumptuous of me?

We've had this beautiful family in our lives since 2017, when Tom took a DNA test and he and R found each other. It was epic, wonderful, full of grace.

I struggle, though. Not the wicked stepmother struggle of "what does this take from my family with him," because it takes nothing away. Love isn't a pie to be divided. Love expands. If you open your heart to it, love will fill you up like a balloon.

My struggle is trying to figure out my place. R was adopted at birth and she had a good parents. Her children had grandparents they loved. I can't be what I never was. However, if you can't be one thing, then you can be another. Even if you have to make it up as you go along. It's all good.

Recently I found an old picture of her biological mother. I was surprised when the picture made me sad. Why did it make me sad? Because it looks like R has her birth mother's mouth. I want her to look like me! Ha! I'm a silly old woman.

I made a quilt for H. It's not a treasured crib quilt. It's a lay-it-down-on-the-floor and get it dirty kind of quilt. I hope the first time he rolls over he does so on this quilt. 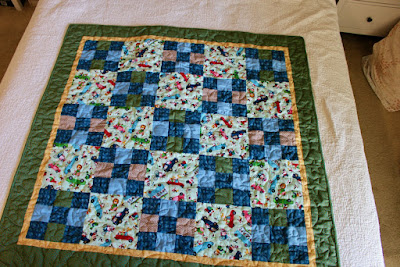 If Robbie had moved to South Bend in the mid-1960s

Blogger friend Roderick "Robbie" Robinson left a provocative comment on my last post. It inspired me to imagine what might have happened if he moved to South Bend, Indiana in the mid-1960's.  Instead, he spent a few of those years in Pittsburgh trying to figure out what this America thing was all about.

South Bend was smaller, but still akin to Pittsburg then; industrial and gloriously ethnic. Had you moved to SB in the mid-1960s, Robbie, you might have hung out at bars my Dad frequented. He could be charming or he could be loutish. Totally up to you. But he would have initially tried to befriend you. And if some lunkhead made fun of you for being a "foreigner" he would have had your back. Seriously, he would have thrown the first punch.

Dad often brought home people from other countries who had interesting accents. Sometimes he brought them home in the middle of the night. There might be singing. My personal favorite was the Irishman who told us about leprechauns. Dad would have put on music that he thought you MUST hear, like "Cleanhead's Back in Town" by Eddie Vinson. Perhaps you and he would have sang together? Unlikely, but this IS my fantasy. And if you had told him how you liked classical music, he would have listened with an ear to hear.

He might have had you eat kielbasa with his Polish friends, or goulash with the Hungarians at the South Side Democratic Club. Certainly you and your wife would have joined my parents at a local joint for a Friday night fish fry.

My Kentucky-born grandfather would have distrusted you, of course, but he might have taken you pistol shooting at the gravel pit. Or shown you his mermaid tattoo, or the American Eagle imprinted across his chest. He would have certainly taken you in his basement to show you how he made his own bullets, really an interesting process. Grandma would have made you Southern fried chicken with mashed potatoes and gravy, and fried corn as the side.

Well, that was fun. If only you hadn't moved to Pittsburgh instead.

Email ThisBlogThis!Share to TwitterShare to FacebookShare to Pinterest
Labels: being a stranger, father, grandparents

My parents took the following pictures in 1961. The family was on the road, moving from South Bend, Indiana to Seattle, Washington where my father had taken a job as a tool and die maker at Boeing. The trip was 2,225 miles by station wagon. What an adventure it was for my parents and the five children jammed into that car! We stopped along the way at Yellowstone National Park, a memorable event.

I'm not sure where this was taken, but it might have been Wyoming. 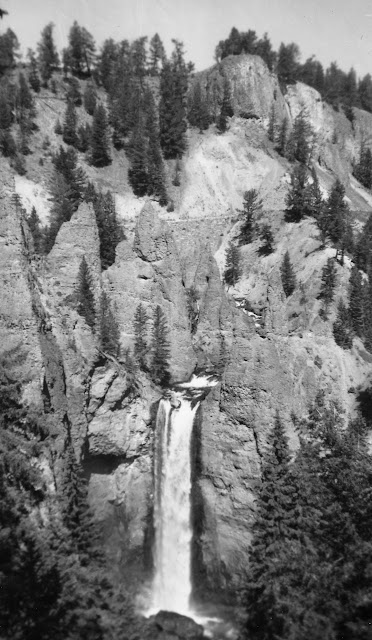 When we stayed at Yellowstone, the bears were pretty bold about eating from the cabin garbage cans. 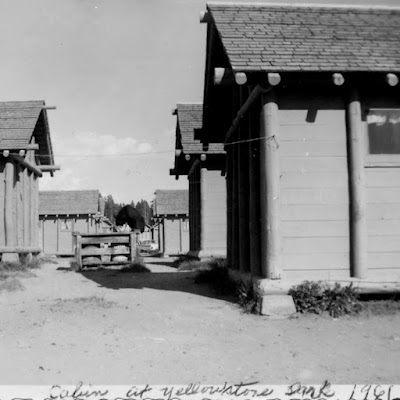 On the road, we often stopped to take pictures of wildlife, like these Elk Moose calves drinking from a creek. 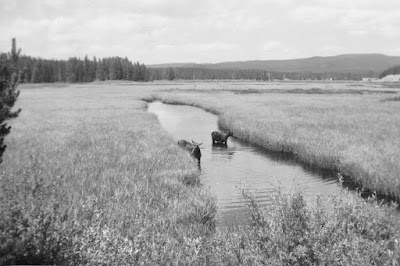 And this one below showing a road that had been tunneled through a mountain. 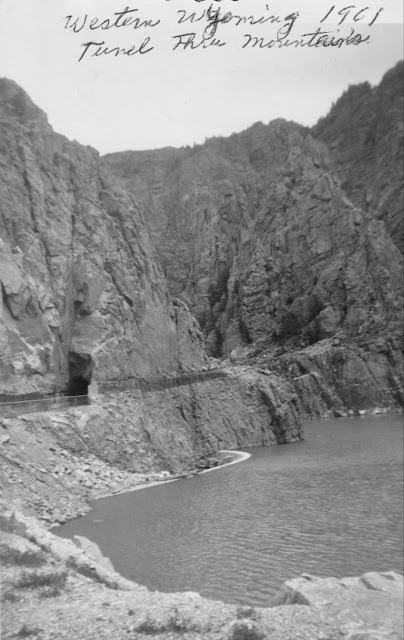 I was 10 years old when this trip was taken, but it remains vivid in my mind. In some ways that trip formed me. Coming from the corn belt, the flatlands, this was my introduction to the magnificence and natural beauty of the United States.
This was the first time I saw my parents take pictures of landscapes and animals, and they were so excited about everything we saw. That made a strong impression on me. My childhood was transformed by this trip and this move. Although we ended up moving back to Northern Indiana only 3 years later, some changes were permanent.
Posted by Colette at 10:25 AM 22 comments: