I meant to write a funny post.  Then I got sick last Friday just before the long 4th of July weekend.  While convalescing I read a lot of books, one of which took place during the Revolutionary War.  That put me in a 4th of July frame of mind.

My mind wandered as we drove through Tennessee and Kentucky last month on vacation.  I thought of my direct paternal ancestors who arrived in Virginia in 1714 as indentured servants.  They later migrated from Fauquier County in the Virginia Piedmont down to Rowan County, North Carolina and then to Grayson County, Virginia in the 1790’s before moving on to Southeastern Kentucky in 1807.  I tried to imagine the land as they might have seen it. I wondered why they moved so often?  I wondered what my female ancestors were thinking as they left family they would likely never see again?  I wondered how long it took those strangers to feel like they belonged somewhere?

I guess I share their wanderlust.  I am also reminded that, although I identify as a Northerner, I have a long and storied Southern heritage.  My father’s people did not move to Northern Indiana until 1925, and then only because the Southeastern Kentucky farmland was used up, making it hard to continue to support a family farm. Along with a number of their friends and family, my grandparents headed north to work in the automobile factories soon after they were married.  They may have found work, but they did not find a lot of respect.  All too often Southerners are deemed stupid by Northerners, and if they are rural Southerners, well - they are called hillbillies.  That's a bad word, by the way.  Nobody likes to be called that.  Please don't use it.

Harriette Simpson Arnow, the Kentucky-born author of The Dollmaker, was a distant cousin of mine (to say the least).  Our closest kinship is through her paternal grandmother wherein we are 2nd cousins, 3 time removed via the Shearer family. Her grandmother, Louise Shearer, and my 3rd great-grandmother, Margaret Ann Shearer, were sisters.  I just happen to have a picture of the two of them with their other sister, Rebecca.  My 3rd great-grandma (Margaret Ann Shearer Huffaker) is in the middle and Harriette's grandma (Louise Shearer Simpson) is at the right.  They look kind of stern, don't they? 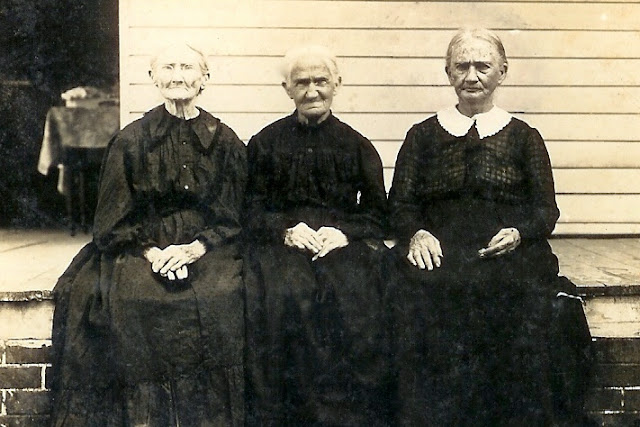 It turns out I am also Harriette's 4th cousin, 2 times removed through her maternal Foster line.

And finally, I wonder if she is also related to me through a man named Reuben Simpson on her father's side?  There were unrelated Simpson families in Wayne County back then, so I am not sure.  The problem with proving these old families is that the U.S. Federal Census did not start listing all the names and ages of people at a residence until 1850.

Like I said, no hillbilly jokes.  These particular families were educated, upstanding, and separate families.  Please don't challenge me to prove it, because I can and it would bore you to tears.  I have a 22,000 member family tree and I know how to use it.

The Dollmaker was published in 1954.  It describes the hardships rural Kentucky hill people endured when moving from Wayne County, Kentucky to the industrial North during WWII.  In 1984 that book was made into an ABC TV movie starring Jane Fonda.  Fonda won an Emmy for her performance.  The Dollmaker is actually the third novel in a trilogy Arnow wrote about Southeastern Kentucky hill people.  The first was Mountain Path; the second book in the trilogy is Hunter’s Horn.  Joyce Carol Oates was a huge fan of Arnow's and I have often wondered if Oates' great novel, Them, was influenced by The Dollmaker.

The most recent common Simpson ancestor we "might" share is a North Carolina man named Reuben Simpson.  He was a Loyalist who fought on the wrong side of the Revolutionary War.  Apparently his father-in-law, Capt. William Sherrill, and his own brother, William Simpson, were on the right side.  Author and genealogist Nona Williams states:


"When William learned that Reuben had joined the Tories at Ramsour's Mill, William rode his horse into the ground in a futile attempt to reach the battlefield in time to kill his brother."
If true, it was a failed attempt - Our Reuben enlisted, fought, and lived to tell the tale.  I will admit I was not thrilled to find him in my family tree.  But as my brother, Big D, keeps telling anyone who will listen, "You can pick your friends, but you can't pick your family."

On second thought, he probably did not tell the tale very often.  Loyalists were hated by the general populace after the War and were often forced to leave the community.  In 1798, he traveled through the Cumberland Gap to Wayne County, Kentucky with his family to start over.

Harriette Simpson Arnow published her novel about a Revolutionary War soldier in 1974.  Her protagonist was a Patriot and an Overmountain Man who was traveling through the Kentucky backwoods looking for his family after the Battle of King's Mountain in South Carolina.  The book is called The Kentucky Trace.  I quite liked it.

Cousin Harriette had a gift for understanding everyday life and people living in the late 18th century.  She was also interested in all sorts of obscure, obsolete practices, like how to make saltpeter in the backwoods in order to make gunpowder, or the logistics of loading a Kentucky Long Rifle during an Indian attack on a forted farm.  I have limited interest in these things, but certainly enough curiosity to keep me reading in awe of her extensive knowledge.  She also wrote two nonfiction books of social history about 18th century Kentucky and Tennessee; however, her personal opinions are dated and she romanticizes the Scotch Irish a bit too much for me.  I like her novels better.

My Southern ancestors fought on both sides in the Revolutionary War and they did the same in the Civil War. I cannot claim a moral purity or even a political consistency in my genealogy.  I wish I could.  I wish they were all heroes; however, the world does not work like that.  Some of my people were brave, some were kind, and some of them were mean-spirited jerks.  The only thing they all seem to have had in common is that none of them were rich.  Like so many other Old Settler families, my father’s line includes many interesting characters.

My direct, paternal 6th great grandfather, Jesse, is buried somewhere in Lawrence County, Indiana, just south of where the wedding we went to last month was held.  He has been on my mind ever since we were up there.  His wife (aka "Unknown") is the reason I took up genealogy years ago.  It bothers me that nobody knows her name.  I have been trying to find her for years.  Still looking.

Old Jesse was a Revolutionary War Patriot who fought at the Battle of Yorktown and was present when the British General Cornwallis surrendered to George Washington.

In 1807, his son Samuel left Grayson County, Virginia to go to Wayne County, Kentucky and marry his childhood sweetheart, Rutha Simpson.  Rutha was the daughter of the aforementioned North Carolina Loyalist, Reuben Simpson.  The night before Samuel left for Kentucky, old Jesse Rector made his son swear on a family bible that he would remain faithful to the United States.  I kind of love that story.
Posted by Colette at 12:08 PM