My paternal grandmother was born in 1905 on a farm in Pickett County, Tennessee. She came from a family with roots in Colonial Virginia. They were part of the great migration of settlers who came through the Cumberland Gap into Tennessee and Kentucky in the late 1700's and early 1800's, when that part of the country was first opened to white settlers. When she died, I lost a direct link to a way of life that no longer exists. Grandma was one of the last of her kind: a sweet, simple woman born into a southern mountain culture with roots extending deep into our pioneer past.

Her later years spent living in a northern industrial city did little to change her essential character, shaped growing up in the hills of Northeastern Tennessee. She had a big heart filled to the brim with love of God and family. She was the archetypal old-fashioned grandmother: kindly, innocent, loving, and accepting.

Grandpa noticed Grandma at a church dance both attended in nearby Wayne County, Kentucky, where my Grandpa lived. One day after that fateful encounter he decided to ride his horse across the state line to where Grandma’s family lived in Northeastern Tennessee. Grandma did not really know my grandfather at the time, and she certainly was not expecting him to visit. When he arrived she was not at home, so her brother rode off to find her. Grandma said she was mortified that he had come to her house, but pleased nonetheless. Not long after that visit, Grandpa talked her into eloping. They escaped on horseback and were married in the middle of the road by the preacher in December 1923. Grandma was a naive and sheltered 18 year old. Grandma’s wedding kiss was her first. She said she had no idea about sex. She got wide eyed and then laughed in her modest, grandma way when she told me that.

Her mother was angry and cried when she found out that Grandma had run off to get married. I would have cried, too.

Next time I will share a letter Grandma wrote to my daughter (her great-granddaughter) in 1981, telling her about what life was like when she (Grandma) was a young girl.

Here is a photo of my grandparents taken in 1924 when my grandmother was pregnant with my father. 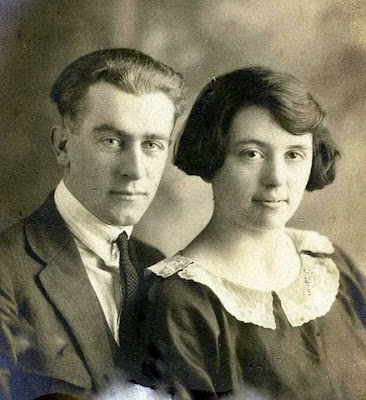